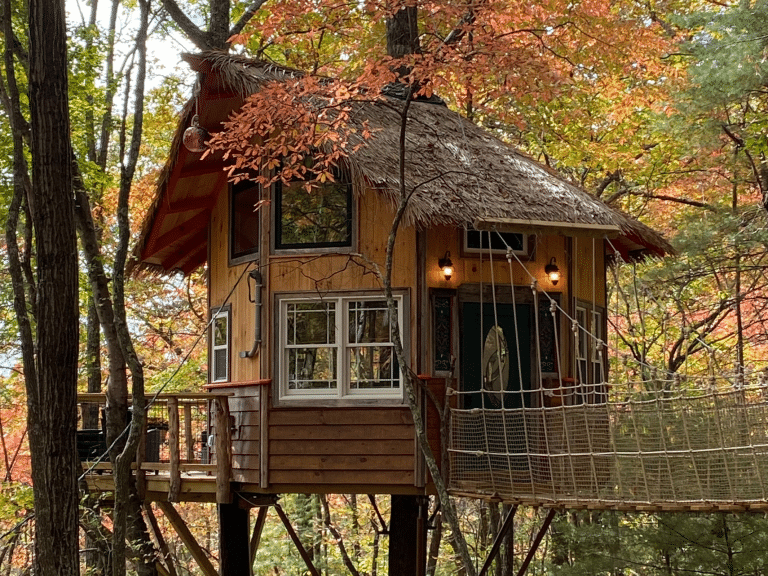 All are invited to spend their next getaway in this tropical styled treehouse that can be found elevated off the ground by a single tree. Guests will be entranced by the unique colors and textures featured throughout. This two story treehouse can comfortably sleep four guests with a queen bed located in the loft as well as full-sized futon that unfolds into a bed on the main level. On the connected platform of the treehouse there is also a private half bathroom. This rental is perfect for small families, groups of friends, or couples.

This treehouse features a breathtaking view of the mountains and a spacious private back porch. Across the suspension is a covered porch with a half bathroom and a flat top griddle for your private use.

See below for additional amenities!

Doug

January 2021
Read More
The treehouses were amazing! They were immaculately clean and every part is a work of art. The supplies/dishes/linens were great and the big fire pit was fun. We had rain during our stay so didn't get to play disc golf or bocce ball as much as we wanted, but next time we want to check out more of the hiking trails. La Paz and Stamish Castle were perfect for 2 different couples and our dogs for a COVID friendly vacation together. Even during the rain we could spend time in the outdoor part of the treehouse that had the griddle and bathroom. One suggestion is to bring shower shoes/flip flops for the shower bathhouse. We only had hiking boots so things got muddy and uncomfortably wet trying to get dressed after the shower. Overall highly recommend and will be back!
Jacob

December 2020
Read More
This was a awesome place to stay.
Mackenzie

December 2020
Read More
The La Paz treehouse was wonderful for a weekend getaway in the mountains of TN. It was a rare find for an amazing Airbnb with a beautiful view. It was very clean and had many amenities. I highly recommend this Airbnb for anyone looking for an outdoorsy and unique stay.
Graci

December 2020
Read More
We loved staying in the treehouse! We were there on a particularly chilly weekend and the house itself stayed cozy and warm. The suspension bridge to the outdoor grill and restroom facility is really fun and there is a small heater in the restroom. The house had everything we needed in the kitchenette and was really comfortable.
Ben

December 2020
Read More
Came across this last minute (morning of) when another property canceled on us. We really lucked into a great quick getaway. Listing is very accurate, here are some highlights that may not be there though: 3 treehouses on the property. I thought this one looked like the best with the best views, and possibly the most recently built, but less sure about that (Dreamweaver was def the oldest from what I could tell). I also liked how the grill was separate from the main house on another platform, along with the toilet (which isn’t the case with the other 2). Toilet being separate wasn’t as big a deal as we thought going into it. Neither was not having a shower right in the house. It was a short walk away and they were SUPER clean. Something that isn’t noted in the listing is that each treehouse is assigned its own shower room (denoted by a sign on the shower room doors). So if there are other guests on the property, it’s not like you’re sharing a shower with them. My gf initially said she wasn’t going to shower for the couple days we were there, but she did after seeing it was your own private shower and how clean they were. Some good hiking trails on property and a disc golf course if you’re into that. Kitchen has plenty of plates, bowls and glassware. A few pots as well. You don’t really need a pan on the grill skillet, just use oil (which is provided). If you need to stay plugged in for work, the WiFi was more than capable at 70 Mbps. Great stay, would def go back. We mostly just read, wrote, talked and drank all day while enjoying the views. So if that’s what you’re looking to do this is perfect!
Rebecca

November 2020
Read More
My boyfriend and I had a an amazing time. At night we went on a walk and there were SO many stars. The views on the sunrise and sunset in the mountains were astounding. The hosts gave us frisbees so we could play on the frisbee golf course. The treehouse has everything we needed. They even gave us fire starters which were very helpful for amateur fire makers. Definitely coming back.
Previous
Next

All treehouses have access to our two bathroom, two shower climate controlled bathhouse. It is located approximately 60 yards away from La Paz. The bathhouse is cleaned and sanitized daily and is a shared facility based on treehouse occupancy.
We provide all linens and towels during your stay. More towels/linens available upon request.
Previous
Next

Have Questions?
Reach Out. We’re here to help.